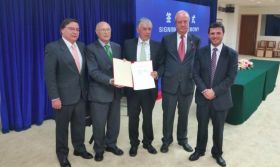 Chilean agriculture minister Carlos Furche, centre, at the signing of the protocol

Chilean has signed an agreement allowing access to China for its shelled walnuts following months of negotiations.

Andrés Rodriguez, president of the Chilean Walnut Commission, welcomed the development. “Chile produces the best quality walnuts; our free trade agreement with China gives us important tariff reductions; our production is growing rapidly and China is the world’s biggest importer, absorbing almost 150,000 tones a year, all of which suggest that Chile could become a key strategic supplier to this market in the future,” he said.

Rodriguez said shelled walnuts account for 10 per cent of total walnut imports into China, while walnuts in their shell making up the bulk of import volumes.

“The process to establish a protocol for shelled walnuts was faster because China considers them to be a processed food,” Rodriguez explained. “Now our main focus will be on negotiating a deal for walnuts in their shell, giving us access to the whole market.”

The agreement was signed during a visit by Chilean agriculture minister, Carlos Furche, and representatives from a number of Chilean fresh produce associations to China and South Korea.