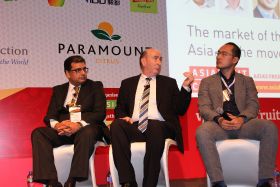 Delegates at the Asiafruit Congress in Hong Kong were given a glimpse into the future of the fresh produce market in Asia by some of the industry’s leading retailers and researchers, on 2 September.

“With a consuming class of 250m-300m, of a population of 1.2bn, the food market is developing,” said Sumit, adding that the food grocery market in India is growing at 10 per cent year on year.

With a growing ‘aspirational’ class, and 60-65 per cent of India’s population under 55, Sumit said imported foods were quickly becoming more mainstream, meaning India would leap from the 12th to fifth largest food consumer by 2015.

“Imports are the fastest growing category, seeing a 300 per cent increase in the last ten years,” said Sumit.

Plant and Food Research’s Bruce Campbell traced a similar trend in China, where a drive towards convenience is leading to an increase in dining out. Alongside the convenience trend comes a growth in imported fresh produce, Campbell said, driven by a variety of factors including increased urbanisation, decreased food self-sufficiency and food safety concerns.

“There’s a shift in thinking from individual products to mega trends in Asia,” said Campbell, emphasising the opportunities in China’s fresh produce industry in coming years, including pushing new and novel uses for produce and creating a broader “health story” around imported fruit and vegetables.

“Think about the future consumers in Asia, not about the current products,” Campbell told delegates.

Fruitday's Loren Zhao ended the final session of the Asiafruit Congress with a run down of some of the newer ventures his company has undertaken this year, including a focus on m-commerce as online sales via mobiles overtake sales via PCs in China.

After successfully running a milestone of an online promotion with Northwest Cherry Growers and Tmall, this year Fruitday re-gained its e-commerce rule with another northwest cherry push, creating mobile apps and promotions to drive peer-to-peer marketing.

“Ladies in China like to take selfies,” said Zhao, adding that this trend in taking photos of oneself lead to a new cherry promotion: offering Fruitday customers free cherries if they posted pictures of their lips online. Across six days, 40,000 people were interacting; more than 6m read about it; and 5,000 pictures were posted – and not all from females. The promotions were part of the broader northwest cherry campaign to “eat and share with friends.”

Zhoa said that along with the declining use of PCs, a revolution was coming for mobile use, leading to new opportunities to develop mobile apps for online purchasing.

Ending the session, Zhao left delegates with this insight that is quickly holding true: “In China, everything happens really fast.”