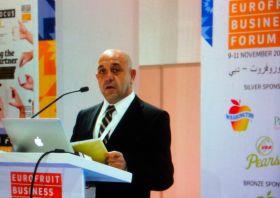 Excitement at the opportunities presented by the Middle East market for suppliers worldwide shows little sign of abating, as local factors including the strength of the economy, rising incomes and a regional trend towards healthier eating combine with international events such as the Russian ban on EU and US produce to attract truly global interest.

This was the principal messages gleaned from the Eurofruit Business Forum, which took place in Dubai this week alongside the WOP Dubai exhibition.

Visitors and exhibitors to the fair heard presentations from an international cast of speakers, learning of the planned global expansion of Saudi date exports, as well as the growing interest in the market from Polish topfruit suppliers, Belgian berry exporters, Moldovan apple and grape growers and US pear companies.

Peter White of DAI Moldova stressed the excellent taste of the country's produce. "We may not be able to compete with the giant supply countries when it comes to volumes, but we can definitely compete on taste," he said. "Apples are the main item, but Moldova also produces great-tasting grapes, stonefruit and walnuts."

Jan Engelen of Belgian cooperative Veiling Hoogstraten revealed that just 1 per cent of Belgian strawberries were currently sold in the Middle East market, a figure that was "far too low".

"We believe in this market," he said, "and we want to see this percentage increase by next year. The berry segment is growing and the health perception of strawberries fits the consumer trend here nicely."

Rajpol's Dominik Wozniak focused on the quality of the Polish cooperative's apples and highlighted the potential of many of its varieties on the market, including Gala, Red Jonaprince, Golden Delicious and Champion.

A recurring theme was the challenge of introducing unfamiliar varieties to the Middle East. Belgian strawberries, for example, must compete with well established varieties from the US, Australia and Egypt – no mean feat.

"Ours have a shorter shelf life," said Engelen, "but they taste better. So our task now is to get local consumers used to this new product."

Lessons can be learnt from the likes of USA Pears, whose Jeff Correa discussed the efforts made by the organisation to address the scant attention once given to pears by the region's buyers.

"It takes time to introduce a new variety to consumers," he explained. "When we released the Red Anjou here, many people initially thought it was an apple. Forelle and Bosc have good potential in the Middle East. We have started to communicate direct to consumers, through our new website, social media, consumer magazines and diet centres."

Stefano Iorini of Memag Trading discussed the opportunities for international suppliers in the Saudi market. The population's growing travails with obesity and diabetes are now encouraging a similarly huge trend in healthy eating, he said.

He equally stressed the importance of finding the right partner in the region, particularly when it came to the Saudi market, where variable transit times and high temperatures can present severe challenges.

Iorini strongly recommended the use of independent quality surveyors such as D-Quality Survey, whose Tia Borcharding highlighted the growing efforts being made in the region to improve quality standards. "We used to see category one fruit with category three quality," she said. "But things are now very different from when we started."

As a result of these rising standards, the surveyor's arrival reports are sought not just in the UAE, but also in Oman and Kuwait, while an opening in Saudi Arabia is imminent.

"We are also expanding into offering departure reports," she announced. "We will be starting in South Africa, as it is a big shipper to this market, so we will be able to link the departure reports with the arrival reports. This will be of great benefit, both to local traders and international suppliers."

Finally, Abdulrahman Al-Janobi, CEO of Saudi Arabia's National Center for Palms & Dates, told visitors of the organisation's efforts to boost the kingdom's date exports, not just throughout the Gulf, but also internationally.

"We cooperate closely with Saudi farmers to increase productivity and quality, as well as in innovations regarding processing and packaging," he said. "We produce 1.1m tonnes per year, but this year we expect around 1.3m. There are around 400 different varieties available, so one of our jobs is to encourage producers to grow the right ones – some are best for the domestic market, while others are more suitable for export."