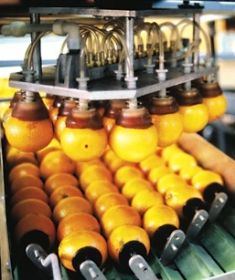 China has suspended all citrus imports from California’s Tulare County with effect from 17 February, citing interceptions of Phytophthora syringae, commonly known as brown rot, according to California Citrus Mutual.

China’s Administration of Quality Supervision, Inspection and Quarantine (AQSIQ) said that it would not allow citrus shipments from Tulare County that leave ports on or after 18 February. The suspension does not affect fruit sourced from regions outside Tulare County.

AQSIQ has reportedly asked USDA/APHIS to investigate and provide feedback on whether protocols were followed with regard to the intercepted loads, which triggered the suspension.

The suspension comes less than a year after China lifted a 15-month ban on California citrus, which had been imposed in April 2013 following the discovery brown rot in California navel shipments.

“This action highlights the importance of adhering to exporting guidelines and protocols that have been implemented to keep export markets open to California citrus,” said California Citrus Mutual (CCM) in its Market Memo, adding that there was a threat to other key markets.

Korea, which is California's largest overseas export market, has notified APHIS of concerns over high numbers of California Red Scale (CRS) interceptions and Fuller Rose Beetle (FRB) interceptions upon arrival in Korea, according to CCM.

“Korean officials have made clear their intention to end their policy of fumigation upon arrival,” said CCM. “They are inspecting loads to determine if the measures implemented by industry effectively mitigate the risk of these actionable pests entering Korea.”

“The recent detections reported by Korea should serve as a warning that the growers and packhouses need to do a better job of keeping FRB and CRS off of fruit and out of shipments to Korea.”

With the slowdown at West Coast ports, the suspension of China access for Tulare County, warm weather and advanced fruit maturity all impacting the Calfornia navel season, CCM warned that the industry cannot afford to jeopardise the Korean market.

“County inspectors will be tightening up the inspections and increasing the sample size to assure FRB and CRS are not getting into loads destined for Korea,” said CCM.