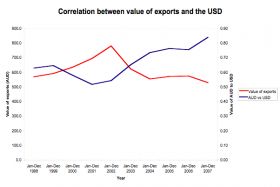 “The outlook for exports is certainly enhanced significantly,” Steve Allen of Riversun, which coordinates Australian citrus exports to the US market, told Fruitnet. “Looking at anything over US$0.90 was making a lot of export markets marginal for us.”