GBC2015: Key players in global berry business say they regard branding as hugely important to its future development 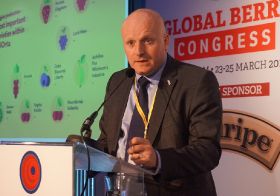 Brands have a key role to play in helping the berry business to grow in Europe, according to three of the continent’s leading soft fruit marketers.

Speaking during the final session of a highly successful Global Berry Congress in Rotterdam, representatives of US-owned trademark Driscoll’s, Belgian co-operative BelOrta and Europe’s first ever berry marketing club, Candonga, underlined their confidence in the ability of proprietary labels to make a major difference in terms of profitability in the fresh berry supply chain.

Carmela Suriano, chief executive of Italian group Candonga Club, said a recent campaign designed to engage with buyers and consumers had made a big difference to the overall level of interest and demand, with a positive knock-on effect for growers in the region of Basilicata.

“Candonga Club is all about the cultivar, territory and growers,” Suriano commented. “The Candonga Lovers campaign connected with buyers at wholesale markets in Italy such as greengrocers, chefs and ice-cream makers.

As a result, she added, selling prices for Candonga-branded strawberries were around 20 per cent higher than other varieties of a similar quality last year.

Marieke Appel, marketing and communications director for EMEA at Driscoll’s, told delegates that the international market still contained many consumers that were yet to be attracted to the category.

“We all believe the consumers are ready for more berries,” she said. “In the US, we’ve built a very good position with a brand people can trust and we are doing this in Europe too.”

In order to guarantee further growth, she continued, a branded propostion was the best way to ensure repeat purchases and loyalty among those consumers.

“We have to bring much more emotion into the shelves. Berry sales are so emotionally driven, so it’s about building excitement and making an emotional connection with consumers. It’s a game that we need to play and we need to live up to our brand promise.”

Jo Lambrecht, commercial director at Belgian group BelOrta, explained that increasing demand in his home market particularly for blueberries and raspberries had resulted in the emergence of what he described as an “early majority” when it came to soft fruit sales.

“Things are changing fast,” he noted. “The drivers on the consumer side include the arrival of celebrity chefs, hype around superfoods and raw food, recipes with berries as ingredients and consumers searching for a healthier lifestyle and better experience.”

On the supermarket side, Lambrecht said, new retail players in the market were helping to create a better culture around berries by forcing traditional supermarkets to rethink their entire berry range. Branding, including BelOrta's own trademarked offer as well as private label and co-branding, was also playing a role in this expansion.

“The discounters are increasingly interested in berries and we are talking about raspberries and blueberries here. Also, year-round availability of berries has been developed, and finally pricing has become more accessible for the consumer.

“About four or five years ago, supermarkets sold berries at rather high prices, so consumers were not convinced. Supermarkets lost a lot – product was wasted and the turnover wasn’t there. Now pricing is a little bit lower and it’s become more attractive for consumers. This is a better situation with fewer losses.”