Australian apple exports on the march

Value of the trade increasing due to strong demand, although overall market share remains small 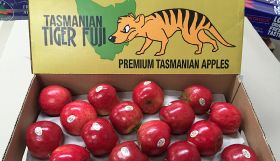 After initial trials last year, there have been 168 tonnes of apples exported from Tasmania to China, which have been mostly marketed through online distributors direct to consumers. China is the world’s largest producer of apples, so securing a slice of the import market is a significant challenge and sellers need to be unique to gain the attention of buyers. Online distribution is a rapidly expanding sector in China particularly for imported fruit and savvy Australian growers are seizing the opportunity to develop trade for the Tiger Fuji variety and creating interest through this online supply channel.

Although smaller in volume, Thailand and Singapore have also imported more apples from Australia this year, with exporters focused on delivering high value varieties such as Pink Lady. By June, 81 tonnes had been shipped to Singapore, up from 23 tonnes last year. Meanwhile, 41 tonnes were sent to Thailand after nothing last year. These markets imported 50,000 tonnes and 129,000 tonnes of apples respectively from all sources in 2014, which shows the potential to generate some market share. Even if demand was just a small percentage it could see a few thousand tonnes exported there.

Indonesia is another market that has seen a positive change lifting from nothing last year to 230 tonnes. Indonesia imported 139,000 tonnes from all sources in 2014, mostly from China. In 2012, Indonesia implemented some trade restrictions to curb the growth to improve domestic self-sufficiency, which for apples seems inappropriate given the tropical climate. Nonetheless, most of Australia’s apples to Indonesia are supplied to settlements in West Papua from Queensland-based exporters serving these areas as well as Papua New Guinea, which remains the largest export destination for Australian apples.

The annual exports trade for apples now stands at 2,152 tonnes worth A$5.9m (US$4.1m). To give further perspective, there were around 1m tonnes of apples imported collectively by all Asian markets in 2014 including intra-Asian trade, particularly from China. Australia’s share was around 0.1 per cent and there is no misconception of the difficulty in generating demand for Australian apples at viable price points acceptable for the industry.