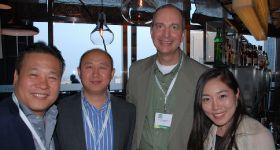 Chinese fresh fruit importer Lantao has announced the opening of a new branch office in the south-western city of Kunming.

“Lantao has opened a branch office in Kunming to handle the south and southwest markets with the capability of reaching 80m consumers,” Provost told delegates to Fresh Produce Forum China, where Lantao was a Gold Sponsor.

“Additionally, we plan to open a branch office right here in Chengdu, so the timing of this conference is really perfect.”

The push into the west could give further impetus to the company’s drive to develop avocado sales in China.

“As the largest importer of avocados into China, we’ll bring ripening technology into China and ripened avocados to Chinese consumers,” Provost said.

The new offices in Kunming and Chengdu will expand Lantao’s network across the country, which already includes operations in Guangzhou, Shanghai, Beijing, Shenyang, Zhengzhou, Harbin and Qingdao.