Seeka profit soars in first half 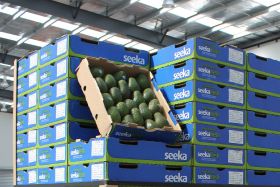 Seeka Kiwifruit Industries has announced unaudited results for the six months ended 30 June 2016, with net profit after tax coming in 92 per cent higher than the same period of 2015, climbing from NZ$3.7m to NZ$7.1m.

According to Seeka, the result reflected the successful completion of the avocado selling season, the first year’s business operations for Seeka Australia and record New Zealand kiwifruit volumes.

The half year results included one-off gains from discontinuing long term leases, which added NZ$457,000 to the after tax result, the company noted.

“The Company had invested NZ$17.8m in New Zealand ahead of the volume increase and the infrastructure was in place to deliver growers a timely harvest," he added. "Early fruit performance was good, particularly in the SunGold variety.”

Franks outlined that the Company was satisfied with the six month results and thanked staff, contractors suppliers and growers for their efforts.

He explained that Australian operations had commenced profitably in their first season, with Seeka harvesting 580,000 tray equivalents of Australian kiwifruit, 1,432 tonnes of Nashi pears, and 1,791 tonnes of European pears. Australian operations were profitable with earnings before interest, tax, depreciation and amortisation (EBITDA) of NZ$1.52m, while delivering NPAT earnings of $660,000 for the half year.

“Our Australian earnings reflect a challenging first growing season, and we are learning about doing business in Australia and its environment” said Franks. “We are very positive about our Australian business and its potential and are continuing to invest in its development.”

Chairman Fred Hutchings noted that Seeka had delivered a timely harvest to growers and facilities were fully utilised.

“Disciplined and professional planning ensured that Seeka had the capacity to handle its growers’ fruit," said Hutchings. "Seeka had a clear vision and strategy. The company was striving to grow from its kiwifruit foundation and to deliver excellent performance to growers and returns to shareholders.

"While the Company focused on its core business and the integration of the Australian business, the strategy remained in place," he added. "This strategy may see the Company contemplate and action value accretive acquisitions or expand its geographical boundaries further. Seeka’s vision remains to be New Zealand’s Premier Produce Business.”