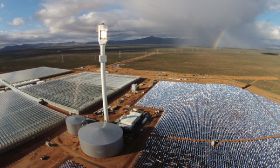 Using primary sunlight and seawater to grow truss tomatoes, the Sundrop Facility is expected to grow more than 15,000 tonnes of tomatoes each year, supplied exclusively to Coles.

“Through the establishment of our high-tech greenhouse facilities, we are driving solutions for the production of healthy food in a manner that eradicates the impacts of variability to ensure sufficient supply of produce in line with consumer expectations, and ultimately promote long-term viability of farming in regions facing water and energy supply constraints,” Marafiote said.

The facility will produce tomatoes year-round, which Marafiote said are “superior quality truss tomatoes of consistently mouth-watering flavour and appearance”.

“The project has also provided economic benefits for South Australia and a revitalised outlook to the local area of Port Augusta, creating interest in renewable energy and jobs for approximately 175 people including local residents,” he added.

Sundrop has signed a ten-year partnership with Coles, making it the longest contract the retailer has ever signed with a fresh produce supplier.

Coles merchandising director Chris Nicholas said the partnership would help increase demand for truss tomatoes, which are continuing to grow in popularly.

“Our ten-year partnership with Sundrop Farms is the longest-term contract we have ever signed for fresh produce and is testament to the confidence we have in the Sundrop team,” Nicholas said. “By growing tomatoes commercially with sunlight and seawater in a part of the world where tomatoes would not normally be grown, Sundrop is redefining sustainable horticulture in Australia.”

The South Australian government provided a grant of A$6m for the project through its Major Projects Program of the Regional Development Fund.