Australian cherries on show in Indonesia 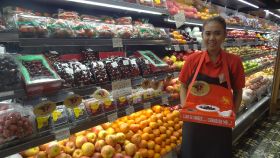 The three-week programme began on 10 December and is being delivered through a number of the country’s leading retail chains.

The move comes amidst increasing demand for cherries amongst high-end consumers over the pre-Christmas period.

“While most of the cherries from Tasmania are marketed for the Chinese New Year period (late January) there is a growing opportunity and demand for cherries for the Christmas period, targeting upper class consumers in Jakarta.”

Morey said the campaign aimed to promote the eating qualities of smaller sized cherries through in-store promotions at supermarkets and hypermarkets in Jakarta. The promotion will target two groups of customers.

“In addition, some promotion will occur with A-B socio-economic consumers shopping at up market supermarkets (Ranch Market and Food Hall) with medium to large sized cherries (26mm+).”

“The smaller sized cherries (24-26 mm) were selling at Farmers Market in Jakarta at about 50 per cent of the price of the larger cherries (26-28mm) being sold through Ranch Market supermarkets,” Lesnawati explained.

David Minnis, managing director of Minnis Horticultural Services, said it had been a challenging season for the Australian cherry industry, due to adverse weather conditions in the main cherry growing regions.

“There is not a big crop of cherries this year but the quality is good and the first shipment of Young cherries (from New South Wales) were picked in the week commencing 5 December, and sent direct to Jakarta from Sydney on 9 December,” he explained.