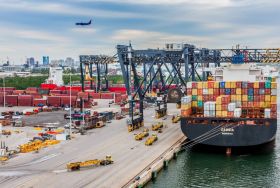 Under the scheme, which is designed to cut transportation times and reduce shipment costs, produce arriving from Latin America to Port Everglades is transferred onto cargo planes at MIA and then flown to their final destination in Europe or Asia.

“Crowley has been a leader in serving the ocean and inland needs of our Central America produce growers for over 50 years, and this programme achieve the latest in a long line of service enhancements designed to help our customer serve new markets more efficiently,” said Steve Collar, Crowley’s senior vice president and general manager, international liner services.

“The liner services our customers know and trust can now be combined with an air option to give them a global presence.”

In December, the port recorded its highest throughput in its history, logging 104,590 TEUs – a 15 per cent increase on December 2015.

TEU counts at Port Everglades have been climbing since September 2016, much of the increase being due to a rise in perishable cargoes from Costa Rica and the Dominican Republic. The recent change in vessel sharing agreements between Crowley Liner Service and Seaboard Marine has also helped boost traffic.

“Port Everglades helped spearhead a pilot programme to bring refrigerated produce from South America directly to Florida, when it was previously restricted to only coming into northern US ports,” said Jim Pyburn, the port’s business development director.

“The programme was a great success and now we are seeing a wider variety of produce coming to South Florida faster and fresher than when it was trucked here from the northeast.”

SeaLand and APL’s North American Express Service began service to Latin America in late 2015, and has been increasing its volumes in the first full year at the port.