The fresh produce industry mourns death of former Tesco manager David Horton, who took his own life this week 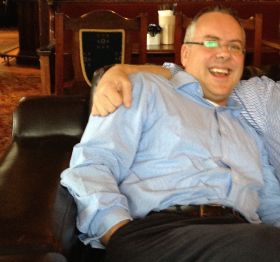 Tributes have come in from across the fresh produce industry for former Tesco category manager David Horton, who died this week aged 45.

Horton, who is understood to have taken his own life after suffering with personal issues, began his career as a flower buyer at Safeway. He moved to Tesco as a buyer in 1997 and eventually moved up to become category manager.

In 2012 he left the UK for Kuala Lumpur in Malaysia to take on a role as head buyer at retail chain Giant, before returning to the UK via Russia and Spain.

He is remembered by friends as a diehard Everton FC fan, very sociable out of hours and “tough but fair” in business dealings.

Tim O'Malley, managing director of Nationwide Produce, said many of Horton's former colleagues and suppliers from as far afield as Thailand have been in touch with condolences. "The overriding comment from suppliers was that he was firm but fair," he said.

"I was introduced to him 10 years ago at Newmarket races and we got on famously from the moment we met. No surprise really as we’re both fat, loud, northern, die-hard Evertonians who like a pint or ten. He was a character and I’ll miss him."

Managing director of Shropshire Brands, Mark Haynes, said: “I knew David very well from his Tesco days and have many fond memories of him. He was a massive supporter in helping me establish our fledgling mushroom business called PGS in partnership with G’s from 2004 and we had many dealings together.

“He was tough but fair, great fun out socially and I never let the fact he was an ardent Evertonian ever get in the way of our friendship.

“We went through some really challenging times together but there was a real mutual respect between us and we went on to build a really successful mushroom business and together transformed the Tesco mushroom category.”

MorePeople’s Guy Moreton, who knew Horton during his early career, remembered him as “larger than life” and “very down to earth”. “He was known for asking suppliers for ‘blue sky thinking’,” he said. “I remember him fondly as being challenging in a very positive way, he would always challenge you intellectually. He was full of energy and ideas, he will be missed.”

Tesco category director for produce, Darren Clough, said: “David was a great guy. He was a great work colleague with great sense of humour who indeed will be sadly missed.”

Former Tesco colleague Peter Durose said he was saddened, as were many industry colleagues across the world. He said: "I worked with David for a number of years at Tesco and was always conscious of his enthusiasm and drive to improve. I know he will be strongly missed and our thoughts are with his family."

A spokesperson for Tesco said: “We’re sad to hear the news of David’s passing. Our thoughts are with his family and friends at this difficult time.”