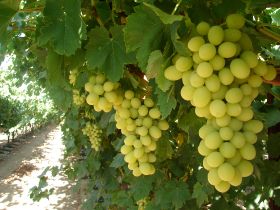 Because recently planted high-yielding varieties are now coming into production, many industry observers had expected the 2017 season to be a record setter, eclipsing the 117.5m cartons (8.6 kg) shipped four years ago. The California Table Grape Commission now estimates seasonal volume at 111.4m cartons or just slightly higher than the 110.5m cartons averaged over the last three years.

According to local meteorologists, July 2017 was the second-hottest month on record for the Bakersfield area, topped only by the same month in 1931. The thermometer exceeded the 100oF (38oC) level for an uncomfortable 28 of the month’s 31 days across the southern San Joaquin Valley, where the bulk of the summer table grape crop is grown. The summer got off to a blistering start in June with three straight days above 110oF (43oC) with the searing heat continuing unabated through mid-August. A cooling trend finally ensued beginning the third week of the month but evidently too late to avoid extensive damage to the crop.

“It’s been a brutal summer so far,” admits Todd Bassett, who monitors table grape quality for a variety of domestic and international clients. “We’ve lost a lot of the crop because berries just burned on vine. There has also been less tonnage because crews were limited on how long they could stay in the field to pick.”

Because of the persistent hot weather (and lack of cool nights), red grapes have been struggling to attain sufficient colour since the harvest got underway in early July. And with the San Joaquin deal starting relatively late this year, many of the early red vineyards lacked adequate leaf cover and sufficient sugar levels for protection. In contrast, there seems to be no lack of green grapes to choose from.

“The green deal is saturated at the moment,” noted Oliver Sill of Columbine Vineyards in mid-August. “Many shippers are requiring customers to take a minimum number of pallets of green fruit if they want any reds at all with their orders.”

The San Joaquin industry will soon be transitioning to red varieties with better tolerance for heat, so availability is expected to improve as the harvest moves toward September.

“We’ll be seeing more of the Krissy variety each year and that one colours up very well. And Scarlet Royal will be coming available fairly soon, which also has good colouring characteristics.”

“There are so many new red varieties to choose from now that even if these colouring issues continue, it shouldn’t be a problem finding quality fruit,” notes Bassett. “However, there could be a problem in another month as these varieties are coming on each due to the heat, but not at the moment.”

A full report on the California table grape season features in the upcoming September edition of Asiafruit. Pre-order your copy now.