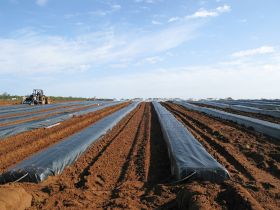 Two of the founding shareholders in African Blue SA, Gailes Holdings Ltd (21 per cent) and Bennani Abdellatif (20 per cent), have agreed to sell their shares to Costa.

Commenting on the deal, Harry Debney, Costa Group CEO, said: “We are very pleased to have reached agreement with our joint venture partners to acquire their interests in African Blue and become the majority owner.

“I want to acknowledge the important role our partners have played in contributing to the establishment of our blueberry plantings in Morocco and making the African-Blue-brand one that is recognised for its quality, particularly in the UK and European markets.”

“Our African Blue Moroccan operations are now an integral part of not only Costa’s international segment but also our overall business,” said Debney. “The blueberry varieties that we grow in Morocco are from genetics developed by Costa originally in Australia, meaning we also control the IP. We believe this gives us a distinct competitive advantage in the UK and European markets, as we are able to deliver a premium product into those markets.”

The principal market for African Blue blueberries is the UK and Europe, with currently 40 per cent  of the product being sold into the UK and 60 per cent into Europe. The season runs from January to June, and begins up to six weeks ahead of the main blueberry growing region in Spain, providing African Blue with an earlier presence in the marketplace, Costa said.

“Year-round demand from Europe and North America is one of the key drivers of the global berry trade. We are confident that we can continue to grow our share in not only the UK blueberry market, but also through continental Europe," said Debney.

Avi Weizman, African Blue general manager since its inception, will continue in this role as a member of Costa’s international team.

Operations include more than 3,500 planted hectares of farmland, 30ha of glasshouse and seven mushroom growing facilities across Australia. In addition to its  Moroccan blueberry operations, Costa has two berry farms in China.