Haygrove shrinks UK berry operations and sets up in China 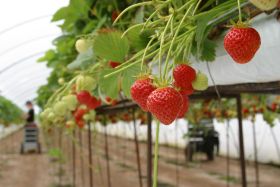 Soft fruit grower Haygrove is shrinking its UK growing operations and planting berries in China for the first time amid continuing uncertainty over labour supply.

The producer announced plans to cut 200 seasonal picking jobs and plant 11 per cent less area at its farm in Ledbury, Hertforshire due to concerns it will not be able to source enough workers following Brexit.

Founder Angus Davison insisted the changes would not reduce volumes from Haygrove’s UK operations, and he made it clear his company was not 'outsourcing' production to China since fruit from the new plantings will be sold on the Chinese market and not exported back to the UK.

“We are changing our cropping mix in the UK to reduce the total volume of seasonal workers required from 1,150 to 950 at peak due to labour access uncertainty caused by Brexit,” he told FPJ. “This change does not reduce the fruit volume output from the UK business.”

Davison explained that he couldn’t afford to wait for Theresa May to reveal her immigration policy because he needs to plan each harvest a year in advance.

In a letter to Theresa May in October 2017, the berry producer urged the prime minister to “rapidly” put another seasonal workers scheme in place, warning her to expect a “steep decline of this significant rural employer and source of food” if she failed to do so.

“It is appreciated that treating one industry differently to another is difficult; however agriculture, unlike construction and hospitality, can be exported,” he wrote. “If enough people are not made available to do the work, the work can be taken to the people.”

Speaking to FPJ, Davison added: “The SAWS scheme had a 98.4 per cent returnee rate and so was not an immigration issue, although it was misinterpreted as one by the government in 2013.”

The prime minster never replied, although Haygrove did receive replies from Defra minister George Eustice and former immigration minister Brandon Lewis, who both sought to reassure the company that the government understood the agricultural sector’s concerns over access to seasonal labour.

Nevertheless, Lewis wrote in November: “It remains the government’s current policy not to operate migration schemes for non-EEA nationals coming to fill vacancies at lower skill levels while employers have access to unrestricted access to labour from elsewhere in the European Union.”

Detailing plans for the new Chinese business, Davison said his company was planting blueberries and raspberries in the southern province of Yunnan province, with the aim of tapping into “huge” demand for soft fruit among the middle class in China and other Asian countries.

This year the producer will grow 15 hectares of blueberries and 5ha of raspberries, with Yunnan chosen for its favourable winter growing environment. In the next five years, Haygrove plans to expand planted to area to 200ha, adding blackberries to the crop portfolio.

Its Chinese business will be aligned to fellow soft fruit producers Driscoll’s and Costa Australia, which formed a joint venture production company in Yunnan in 2016.

Haygrove will also sell its polytunnels and substrate systems in China through its manufacturing arm, Haygrove Growing Systems.