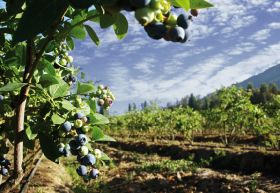 India is poised to become a major market for Chilean blueberries according to a report by ProChile.

SAG and its Indian counterpart are close to signing a technical agreement that will confer Chile fruit fly-free status and remove the requirement for fumigation, thereby significantly extending the shelf-life of the fruit.

“Our agricultural attaché in India is working hard so that from next season we can export without fumigation,” said Andrés Armstrong, general manager of the Chilean Blueberry Committee.

Due their high cost the berries are only consumed by a niche segment of the population and up to now they have been used mainly in the Horeca sector as an ingredient in desserts and confectionary.

They are being seen increasingly in supermarkets, however. The US is the main supplier of blueberries in India, with an 89 per cent share in the market. It is followed by Canada, with 6.8 per cent and the Netherlands, with 3.4 per cent.

Although Chile currently ships only very small volumes of blueberries to the Indian market, the recent reduction of the basic customs tariff from 50 per cent to 15 per cent gives it an advantage over other suppliers.

The ProChile report singled out the short shelf life of blueberries and the lack of an adequate cold chain in India as major obstacles to growth, but concluded that an improvement in logistics and temperature management, coupled with aggressive promotions, could create significant demand for blueberries in the future.