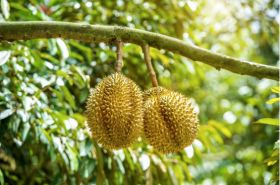 China’s online retail giant JD.com is marking the start of the Thai durian season with a “Super Durian Day” today (18 May), with discounts on deliveries of Thai durian to customers’ in over 300 cities in China.

More than 115,000 Thai durians were sold by JD in 24 hours during a similar promotion last year, JD.com said in a press release. JD, which is China’s largest retailer, online or offline, has sold the fruit since 2012.

Transaction volume for durians on JD.com grew 11-fold between 2016 and 2017, the statement said. And the company expects to import more than six million Thai durians this year, including an agreement with Queen Frozen Fruit, Thailand’s main frozen durian distributor, to buy a third of Thailand’s frozen durians.

Durians are most popular in first and second-tier Chinese cities like Beijing and Guangzhou, but demand is growing in other regions where the fruit was not previously easily accessible, JD.com said.

With its nationwide logistics network, JD has become a primary source for durians in fourth and fifth-tier cities in China. Customers in those regions have more difficulty accessing imported tropical fruits, and make up 45 per cent of JD.com’s durian transaction volume.

Super Durian Day will coincide with the Grand Celebration of Thailand on JD.com, in which the company will cooperate with several Thai companies including Ventry, Mistine and 24shopping, among many others bring Thai products to China.

The United Nations estimates durian imports in China have climbed an average of 26 per cent year-on-year in the past decade, reaching US$1.1bn in 2016.