Bigbucks to arrive in a Flash

Bigbucks, the full-red Gala causing a stir in South Africa, has a new name 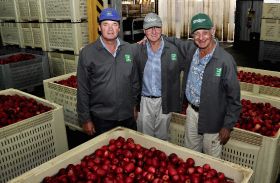 Pink Vein, the owner of the new Gala apple Bigbucks, has finally picked a commercial name for the variety – Flash Gala.

Pink Vein is a joint venture comprising Buks Nel, Derek Corder, and Anthony Rawbone-Viljoen, both veteran Elgin apple growers, while exporter TruCape will be one of the companies marketing the variety.

With more than a quarter of a million trees already purchased, Bigbucks is now one of the fastest growing varieties in South Africa.

The lengthy process of name selection took some time and the variety has been exported under the name Bigbucks for the past two years.

The owners say the variety is expected to be very popular because of its high packout percentage. Buks Nel previously told Fruitnet that it delivers fruit of exceptional colour and the high percentage that will meet the full red standard will increased the profitability of the variety.

“Unlike most Gala strains which are unstable deep within their souls, this one remains true to type," says Nel. "There is therefore no reversion to the original poorer bi-coloured mutations.”

It will also improve harvesting operations because all the fruit can be picked in one orchard run, and not several times as is the case with other varieties.

“On the afternoon of 18 January 2011, one of those few very hot days in Elgin, while walking through the orchards at Oak Valley Estates of the Rawbone-Viljoen family, it  was the deep wine-red colour that first caught my eye”, explains Buks Nel.

Calla du Toit, chairman of the Bigbucks Growers Association, says in the fruit industry a find like this is pretty much like discovering a new galaxy for astronomers.

“The reason that Buks was in the right place at the right time to notice the mutation on the Corder Gala is because he has dedicated his life to being in orchards every day, especially at apple ripening time.”

Anthony Rawbone-Viljoen says that the process to arrive at a brand name was a long one.

“It was right to name Bigbucks after Buks and with the promise that it would make big bucks for those who planted it," he outlines. "We didn’t want to register a name that might suggest to the consumer that this fruit was expensive so we embarked on brainstorming names. The process of searching for a name that hadn’t already been registered or a name that when sold in one of the over one hundred countries in which South African apples and pears are sold, is not offending terms of cultural sensitivities.”

Rawbone-Viljoen says the idea behind Flash Gala is that it will be sold in a ‘flash’ and also that the bright red colour of the fruit is like a flash of light.

“Although it is often said that dynamite comes in small packages, in this case it is most definitely true. We should say: please mind the Flash," he says.