Following the start of the Californian season, avocado imports to South Korea are increasing dramatically 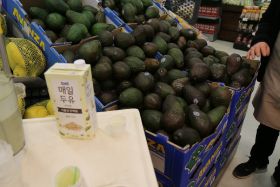 South Korea's avocado imports have enjoyed a dramatic increase over the past six months. Following bumper growth from January to April, the month of May has seen volumes climb from 232,727 trays (5.5kg) to 348,909 trays – a 34 per cent increase.

Martin Napper, market manager for Avoco (the marketing collaboration between Primor Produce and Southern Produce which markets fruit under the Avanza brand) said that with over 1m trays already imported, the year could hit 2.5m trays with seven months of sales still to go.

Napper mentioned that this season has seen a good volume of Californian fruit with a lot of smaller sizes, offered on discounts. The lower retail price point has driven consumption, he said.

The US supplies 65 per cent of the South Korean market for avocados, and New Zealand 15 per cent. Initial growth for the California season was helped along by Avanza’s promotions in the category, however, Napper told Asiafruit that for the first time this year Mission Produce, in conjunction with Californian Avocados, will be conducting in-store tastings.

When asked about the sustainability of this growth, Napper pointed out that the irregular bearing habits of avocado production will temper progression, along with demand from other developing markets.

He added though that as long as the market continues to deliver adequate returns, exporters will allocate good volumes.