Smiles after the Summit? 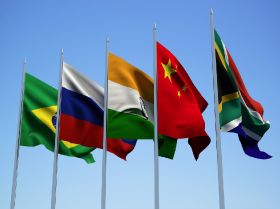 This week’s BRICS (Brazil, Russia, India, China, South Africa) Summit comes at a time when world trade is under the spotlight due to the recent trade wars instigated by the US. The BRICS partners will undoubtedly consider these developments as they promote various trade initiatives.

The South African fresh produce industry is also watching developments in the hope that agreements will be signed that will allow increased sales and better access to countries of the East, particularly India and China.

Following discussions in India and China, the South African industry now focuses its hopes on the summit that it, and Cyril Ramaphosa, will host.

It is hoped that the new spirit of renewal and cooperation brought about by the Ramaphosa era will be taken into the discussions and that the fruit sector will also benefit from the summit.

It has been rumoured for some time that the signing of an agreement giving South African pears access to China, could be signed at the summit.

The CGA’s Justin Chadwick previously said that improved access to India would be a huge benefit for South African citrus. “The fact that we cannot presently do in-transit cold treatment is simply too risky for exporters and fruit quality suffers. If we can change the protocol we can double shipments in a relatively short time.”

While South Africa prepares to sell around 30 million cartons of lemons in 2025, it is clear that the country needs to further improve market access in East Asia and South East Asia in order to boost demand and open new marketing opportunities. Access to China is at the forefront of strategies to deal with the future crop. Lemons cannot be shipped under the normal protocol temperature for citrus fruit exported to China and access will therefore depend on whether the authorities in China will accept this.

In this respect negotiations with China are reported to be proceeding well and the South African recommendations have been partly accepted by the Chinese authorities.

South African avocados have been riding the crest of a wave in markets in the West were demand has grown strongly during the past decade, but the industry also knows that with future growth they cannot do without the vibrancy that the Chinese market can offer to the business.

A whole host of investment agreements will be made at the BRICS summit, many of which will be announced this week. It is not clear that fresh fruit will feature.

The CGA’s Justin Chadwick stated that it was not clear how much attention the recommendations of technical committees dealing with fresh fruit will get at the summit. Previously, Jacques du Preez of Hortgro stated that he would adopt a wait and see attitude. “Anything can happen, so let’s wait for the end of the summit.”

Reports from China suggests that South Africa may well become flavour of the month amongst the Chinese trade as the effect of reciprocal tariff increases between China and the US escalates. While US growers may have to contend with tougher entry conditions, the South Africans may benefit. “It may just be a time of great opportunity to build trade relations,” said one exporter.