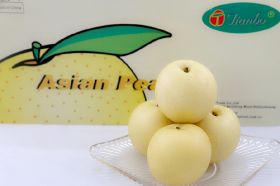 Unfavourable weather conditions caused a decline in crop yield this season across key pear production regions in China. In Hebei, the nation’s largest pear producing province, the situation is no different.

“The fall in production is more than 50 per cent for Hebei pears, and commercial volume is low,” said Gavin Bian, managing director at Hebei Tianbo. “The frost in April, and the July hail in some parts are the main cause. The reluctance in crop management among some pear growers after the bad weather also attributed to it.”

Faced with competition from imported fruit in the domestic market, Hebei pear growers in recent years continue to explore the opportunities new varieties could bring. Emerging varieties such as Crown are a silver lining for the industry.

“Some new varieties are doing quite well. They are replacing conventional varieties such as Ya and Snow pears in the market,” said Bian. “Red Fragrant and Xinli No.7 are both popular, but unfortunately lacking in storage abilities. Crown, however, performs really well in that regard. It can be stored for more than a year in regular cold storage. This is a big advantage.”

The scarcity in supply this season drove up domestic prices in China. Coupled with low fruit quality, a pessimistic trade environment, and other factors, 2018 proved to be a challenging year for Chinese pear exports.

“Chinese pears are not competitive this season. Some import markets turned to other fruit categories. In the past few weeks in particular, export volume is down more than 30 per cent year-on-year,” Bian commented. He pointed out the ongoing US-China trade dispute is also making exporters more cautious and slow.

With an ambition to unite the Hebei pear industry, Bian led the establishment of Choice Fruit Alliance late last year, an industry alliance bringing together nine leading fruit companies in the province.

At the beginning of the 2018 pear season, the alliance effectively coordinated export programmes and pricing. Cartons sent to the US all carried a Choice Fruit Alliance sticker.

“In the past, competition between Chinese agri-product exporters tended to get vicious,” said Bian, who acts as the alliance chairman. “People want a healthy business environment where everyone can invest in development together to have a unified standard system, grading protocols, brand management and marketing.”

See the full story in the October 2018 edition of Asiafruit Magazine.