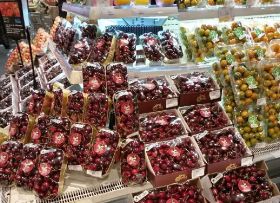 Having responded to strong demand for Lani cherries in Taiwan and China for a number of years, increased production of the proprietary variety meant Freshmax New Zealand was able to extend sales programmes to Thailand, Singapore and Vietnam last season.

These five markets will again form the nucleus of the upcoming Lani sales campaign.

“We see a huge opportunity for growth in these markets and we are incredibly enthusiastic about the season ahead,” explains Tracey Burns, Freshmax New Zealand’s division manager – export.

The Lani harvest in New Zealand’s premier cherry production hub, Central Otago, will get underway in early December, making it one of the first varieties shipped from the region.

Freshmax’s focus will transition to another of its proprietary cherry varieties later in December, with the Starletta harvest to begin in the final weeks of the month and wrap-up in late January.

Burns said the extended production window is one of Starletta’s key attributes, as it enables the white-fleshed cherry to be part of Chinese New Year sales programmes.

Adding further value to discerning Chinese consumers, Starletta production is also being managed so that the portion of extra-large sized cherries increases each year.

“We see huge demand for Starletta in China; with consumers prepared to pay a premium for this extremely high-quality white-flesh variety,” Burns noted.

To date, Freshmax’s marketing campaign for Starletta has been built around building awareness of the variety’s unique attributes.

This season the company will run an extensive marketing campaign for both Lani and Starletta, with the brands to be supported across various touchpoints, including instore activity, a strong digital and social media campaign, regional consumer PR and the launch of branded websites.

“We have made a significant marketing investment and our objectives are clear; we want to establish ourselves in the hearts of consumers, create an engaged online community and continue to reinforce our premium positioning,” Burns said.