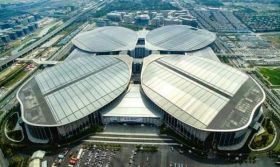 Latin American fruit producers and high-level government delegations flocked to the inaugural China International Import Expo in Shanghai this week in search of new opportunities in the Chinese market.

A number of agricultural products from Central and South America are being showcased at the weeklong event, at which more than 3,600 companies looking to boost their sales through China’s booming online and offline channels had the chance to present their products to thousands of Chinese buyers.

Chile, which sent more than 30 companies to the fair, used the event as an opportunity to sign a series of agreements with China, including one to strengthen sea-air transport links in order to deliver fresher Chilean fruit for Chinese consumers.

Brazilian Agriculture Minister Blairo Maggi was one of four government ministers forming part of a public-private trade mission to Shanghai. It was due to hold talks with Chinese phytosanitary authorities that could pave the way for the much-anticipate signing of the protocol to allow imports of Brazilian melons.

During the fair, Panama’s Simply Natural Harvest announced that it had signed a memorandum of understanding with one of China’s largest fruit importers, paving the way for its entry into the Chinese market.

The company, which recently opened one of the largest nurseries in Central America, exports organic bananas, mango, limes and avocados to markets including Germany, France, the Netherlands and Europe through the Panama Exporta programme.

Panama’s Minister of Agricultural Development, Eduardo Enrique Carles, recently announced the opening of a new Panama Exporta office in Shanghai, which will create new opportunities for Panamanian companies in that market.

China is Panama’s second largest trading partner after the US and the second most important user of the Panama Canal.