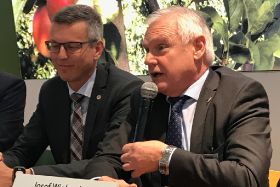 New director Martin Pinzger spoke officially to the press for the first time at Fruit Logistica in Berlin. He was sitting alongside current director Josef Wielander, who confirmed his decision to step down after a remarkable 43 years with the company – including two decades in his current role.

Wielander’s successor has a similar track record in terms of his pedigree in the fruit business: like his predecessor, Pinzger has spent around 20 years in charge of Mivor, one of VI.P’s major member cooperatives. Wielander was chief executive of the same cooperative for a similar period prior to heading up the association.

Pinzger himself said VI.P’s list of challenges in the years ahead would include countering overproduction of apples in the international market by showing an even greater commitment to quality and service. “Today’s consumers expect healthy and sustainably produced fruit,” he said. “We are aiming to meet these expectations in future as well with our apples from both integrated and organic production.”

As well as the widely grown Golden Delicious, which is very much a flagship product for the whole South Tyrol apple region, Pinzger said licensed varieties such as Cosmic Crisp, Envy, Kanzi, Yello, Kissabel, Sweetango and Ambrosia were expected to play increasingly crucial role in the Val Venosta brand portfolio. In addition, he noted, the group was committed to developing sales of other seasonal items such as cauliflower, cherries and berries.

“We have ambitious goals which require highest engagement and commitment from our staff and member cooperatives,” he concluded. “However, we do not shy away from building the necessary alliances and partnerships for the complete satisfaction of our customers. Because only satisfied clients can ensure a secure future to our 1,700 producers.”

Changing of the guard

For Wielander, departing a role he has carried out for so long prompted an understandable mix of emotions. “After such a long time, I obviously leave my job as director with a smile in one eye and a tear in the other and I thank everyone who accompanied me,” he said. “I’m glad that my successor Martin Pinzger is a worthy, down-to-earth man with his feet on the ground.”

Speaking to Fruitnet. Wielander said the group’s succession plan would ensure continuity for all concerned. “Changing a company’s leadership is never easy, but in the case of Martin Pinzger we have got the ok from all of the group's directors, so the transition is easier for us,” he commented. “We already know his ideas, and he already knows VI.P and what we've done. So there is a security for all our customers and employees, and we're not wavering too much from the line we are on.”

Thomas Oberhofer, president of VI.P, said the group had sought a balance between flexibility and consistency in making the appointment. “Our new director should continue what has proven successful, but be open for new ideas at the same time,” he suggested. “As we are an association with seven member cooperatives and 1,700 producers, our new leader has to be familiar with the characteristics of the cooperative system and know how to deal with them. This also includes convincing many people. An insider like Martin Pinzger, who has been CEO of the Mivor cooperative for twenty years and has his own fruit-growing business, has all the prerequisites to lead VI.P into a successful future.”