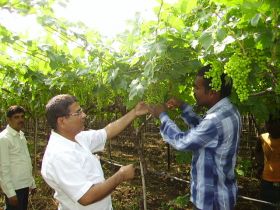 Indian grape exports are on course to top the 200,000-tonne mark for the first time in 2018/19 according to the country’s Agricultural & Processed Food Products Export Development Authority (Apeda).

Exports for the current year have risen over 11 per cent to 31,182 tonnes compared to the same period last year.

Favourable growing conditions in state of Maharashtra and improved pesticide management by growers through better farm practices are believed to be the main reasons for the increase.

However, the Indian Express reported this week that grape exports to Russia and Sri Lanka had been halted midway through the season due to stronger pest control requirements in those markets.

"While export to the more lucrative European and UK markets continues, overproduction has led to collapse of prices at the farm gate level," it said.

Vilas Shinde, chairman of the Nashik-based Sahyadri Farms, a Farmers Producers Company (FPC), told the newspaper that plant quarantine issues had been raised by both Russia and Sri Lanka. “Both the countries have asked for declaration of the entire area as pest-free,” he said.

Russia is the second biggest market for Indian grapes after Europe. Last year it imported 27,434 tonnes of the fruit.

Meanwhile China has also emerged as an important market, with exports hitting 2,250 tonnes so far this financial year, compared with 607 tonnes in 2017/18.