Multi-million dollar operation set to handle up to 12,000 tonnes of blueberries per year 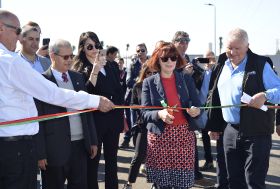 The multi-million dollar facility, located in Larache, has been designed to handle up to 12,000 tonnes of blueberries per year and is capable of processing 150 tonnes per day.

Costa Berry International general manager, Peter McPherson, said this was a further major investment by the Australian-headquartered Costa Group in Morocco through its majority owned companies African Blue and Sweet Berry, which service markets throughout Europe.

“This facility will enhance the quality and reputation of Costa Group’s world leading blueberry genetics, which have been grown in Morocco for over a decade,” McPherson said.

“The blueberry varieties that we grow give us a distinct competitive advantage in the United Kingdom, European Union and Russia as we are able to deliver a premium fresh product into those markets.”

The opening coincided with a visit to Australia by Aziz Akhannouch, Morocco’s minister of agriculture, fisheries, rural development, water and forests. Akhannouch toured one of Costa’s berry farms in Corindi, New South Wales, to gain an insight into the Australian operations.

Costa acquired a majority ownership stake in African Blue in late 2017. Its Moroccan production area covers 294ha, with supply also coming from an additional 108ha belonging to licensed third-party growers. Further development is currently being undertaken to extend the length of the Moroccan season, including plantings at Agadir on the Atlantic Ocean.

In addition to the Moroccan operations, Costa operates three berry farms in China with more than 100ha.