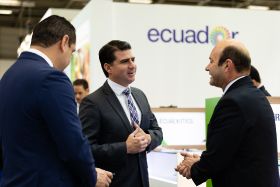 Ecuador has embarked on an ambitious programme to modernise its banana industry and position the country as a supplier of premium bananas grown under internationally recognised environmental and social standards.

Speaking to Fruitnet at last month’s Fruit Logistica in Berlin, Agriculture Minister Xavier Lazo Guerrero outlined a series of measures designed to raise productivity levels and put the industry on a secure footing for the future.

Bananas play a vital role in the country’s economy, generating around US$3bn in annual exports and providing direct and indirect employment for some 2m people.

As a banana producer himself, Lazo understands better than most the challenges facing the industry and is under no illusions as to the scale of the task he faces. At the same time, he sees this as a tremendous opportunity for Ecuador to strengthen its position in Europe and other global markets.

“Ecuador’s production curve mirrors market demand, with volumes peaking when consumption is at its highest in Europe, so there is plenty of potential to increase our sales volume. But in order to realise this potential, we need to evolve,” he says

Bananas are a political hot potato in Ecuador and the tendency of previous administrations to prioritise policy over production has left many in the industry wary of yet more state intervention. What is needed now, says Lazo, is a process of reconciliation, reconstruction and repositioning.

One of the priorities he must address is how to increase productivity levels – the surest way of reducing its vulnerability to market pressure. This is no easy task, however, given the predominance of small and medium-sized farms, which together generate around 70 per cent of the country’s banana output.

“Our focus is very much on helping small producers who lack the financial support to invest in the necessary infrastructure and technology to maximise their productivity,” says Lazo.

To achieve this goal, the ministry has set up a new body, the Underscretariat of Musaceas, that will oversee all aspects of the industry and provide technical, phytosanitary, financial, commercial and regulatory support to producers. One of its first goals is to develop specialised long-term credit facilities to stimulate the modernisation of farms.

“We are moving towards a more flexible and tailored approach for small and medium-sized producers so that they will have a greater incentive to renew their plantations,” Lazo continues.

“All improvements start with the producer and investing in the proper infrastructure and technology will enable us to significantly improve yields right across the industry.”

He also recognises that small producers also have a long way to go when it comes to obtaining international certification on social and environmental standards, but insists that low wages, dangerous working conditions and environmental degradation do not reflect the reality of today’s banana industry in Ecuador. The goal now is ensure that this message gets  through to the consumer.

“The fact that so much of the industry is in the hands of small producers can be a challenge when it comes to effecting change, but the other side of that coin is that land distribution is much more democratised than in other banana growing countries in the region,” he notes.

“Our agricultural workers are also among the highest paid in Latin America and by law, 15 per cent of company profits in the sector are required to be shared amongst the workforce. These are the realities of our banana sector that we should be sharing with consumers.”

The strict laws governing banana production certainly afford workers a high degree of protection, but they have long been a cause of friction with exporters, who argue that restrictions on new plantings and the official minimum price paid to producers are out-dated and fail to reflect the commercial reality of today’s global industry.

The 21-year-old law is currently under review but critics say the proposed changes do not far enough. The proposed new law retains the ban on new plantings “unless in the national interest and authorised by the National Assembly” (although this does not apply to plantains, baby bananas and organic bananas), while also retaining the single official price.

Lazo himself is wary of radical change. “Reforming the law is important, but we have to put our house in order first. There is so much work to be done in terms of modernising farms and raising productivity – improvements start with the producer and this should be where our focus lies,” he says.

At the same time, the government is working hard to improve market access. Although exports to the European Union have risen since Ecuador’s accession to the Andean-EU free trade agreement in 2016, last year it only shipped bananas to eight European countries. In Asia, meanwhile, China, Japan and South Korea are among the markets being targeted for growth.