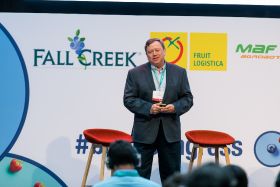 A surge of investment in new blueberry acreage is set to drive Mexico’s soft fruit export growth in new markets in the coming years.

Mexico is currently the world’s leading blackberry exporter, but blueberries, along with raspberries and strawberries, have accounted for much of the growth in new acreage since the start of the decade.

Between 2014 and 2018, the value of blueberry exports increased by 264 per cent, making it the berry with the highest export value increase over the last five years.

At present, 97.6 per cent of the 356,000 tonnes of berries that Mexico exports annually are destined for the North American market. But the growing uncertainty surrounding its trading relationship with the US is fuelling interest in new markets in Europe and Asia.

Visitors to the 2019 Global Berry Congress in Rotterdam heard from José Luis Bustamante of national exporter association Aneberries how Mexican exporters are looking to target market windows when global supply it at its lowest, specifically in April and, to a lesser extent, October.

“In other categories where sea shipments are not an option, we also see the potential to exploit profitable niches for premium airflown berries at key points during the season,” he said.