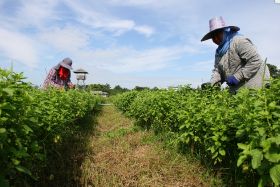 East-West Seed Group has warmed producers of the potential impact of the El Niño weather phenomenon, which it has said is likely to bring high temperatures and drought to parts of the globe.

According to the group, The UN’s World Meteorological Organization (WMO) has predicted a 50 per cent to 60 per cent chance that a weak El Niño event will become established during the March to May 2019 season.

"Drought will most likely be the main threat to food production, especially for smallholder farmers who rely on natural water sources to water their crops," the group noted. "This could severely affect food security as smallholder farmers produce 80 per cent of the food consumed in Africa and Asia."

Smallholder farmers, in particular, are at the highest risk, East-West said, as they often do not own technologies (such as greenhouses or irrigation systems) that can mitigate the climate changes. They typically also have lower financial reserves or insurance than larger scale farmers.

With many farmers likely to be concerned about the potential implications, the company has put together a list of things that producers can do to maintain their crops.

In addition, East-West suggests growers move from water-intensive crops like rice to more water-efficient products like vegetables, while also choosing more robust crops that can stand up to heat and investing in protected cultivation technologies.