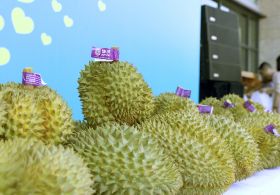 April 22 was the 50th World Earth Day. There is only one earth. According to The Lancet, an authoritative medical journal, a transformation to healthy diet by increasing the consumption of fruits and vegetables not only benefits health, but also reduces carbon emissions.

Meanwhile, Wifi8, a certified Internet Service Provider of China's metro system and an active media app for metro passengers will advocate the programme together with Joy Wing Mau and WildAid. It will appeal to the public campaign of “More fruit and vegetables, less burden to Earth” and spread the message of positive, environment-friendly and sustainable dieting. So far, Joy Wing Mau is the first fruit company to join the WildAid Shushi programme.

Early this year, one of the world’s most authoritative medical journals The Lancet released a joint study made by 37 scientists from 16 countries in various fields over three years. The study says current dietary trends, combined with projected population growth to about 10bn people by 2050, will exacerbate risks to people and planet. The report suggest a transformation to healthy diets including a greater than 50 per cent reduction in global consumption of unhealthy foods, such as red meat and sugar, and a greater than 100 per cent increase in consumption of healthy foods, such as nuts, fruits, vegetables, and legumes.

Jason Zhang, President of Joy Wing Mau, says his company is a platform that links core fruit resources around the globe and provides professional service in omni channels. Being in the industry for 21 years, JWM has been practicing the mission of “Better Fruit, Better Life” and the value of “Kindness”. This is highly consistent with the dieting transformation proposed by The Lancet and also echoes with the Shushi Program initiated by WildAid.

Jason adds that fruit is an ordinary industry, a kind industry and a great industry. Fruit absorbs rain and sunshine to bring nutrition and health; unpicked fruit falls to the ground and nurtures the plant. This is the circle of life. If you look at fruit, it co-exists with earth in harmony and benefits human beings and society. That’s why JWM takes responsibility to promote the sustainable development of the fruit industry.

For the past years, JWM has been striving for the “kind” cause. Apart from advocating increased consumption of fruit in the diet to reduce green house emissions, JWM also focuses on new agriculture – implementing its Invigorating Agriculture strategy to echo the government policy of Rural Revitalization, and shifting the attention from production to nutrition and quality; JWM is also committed to environmental protection, sustainability and recycling. It conducts a “Kind Resources” programme to recycle used batteries and improve the environmental performance of packing material to protect water and soil.

Shushi Program: Change the world with every bite

Duanduan Xie, the manager of the Shushi Program at WildAid, welcomed JWM as a Shushi partner. She pointed out that compared with meat, the production of grains, vegetables and fruits consumes much fewer natural resources and emits less greenhouse gas.

Science reports show that reducing or giving up animal products in the diet is the most effective way for an individual to reduce their impact on environment.

Therefore, WildAid initiated the Shushi Program to look for industrial representatives in China and work with government agencies, media, companies, institutions, schools and NGOs to promote healthy diet and Shushi culture in China.

In the future, the three parties will work together on healthy diets and sustainable development to raise public awareness and mak sustainable dieting more recognized and accepted.