Ahead of access for its durian, the Malaysian Government held promotions on the ground in China 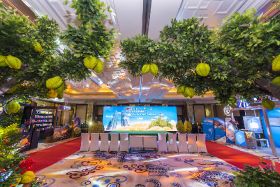 Musang King, the prized Malaysian durian variety is rumoured to have access to the Chinese market by the end of this year.

Running concurrently to the Belt and Road Forum in late April, Malaysian durian exporters were able to promote their fruit to potential Chinese buyers at the two-day Malaysia Durian Festival.

South China Morning Post reported, following the deal last August between China and Malaysia, an export protocol is due to be complete in the coming months. With access, and an increasingly wealthy population in China, Malaysian exporters are expecting a surge in demand.

“Malaysian durians are more expensive [than Thai durians]. But now the Chinese economy is doing so well. The Chinese are getting richer and have higher demands for what they wear, what cars they drive, and what food they eat,” Wan Mun-hoe, managing director of the Malaysian company Newleaf Plantation, told South China Morning Post at the festival.

Newleaf describes the Musang King durian as “the Hermès of durians”.

Kaeden Ho, executive director of Newleaf told Fruitnet Chinese consumers are becoming more selective when purchasing durians, and that the Musang King variety is adored for its strong aroma, creamy texture and name.