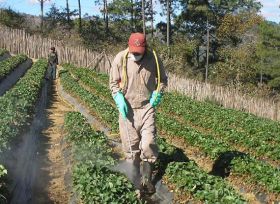 The Fairtrade Foundation, along with a coalition of certification schemes promoting safer pest control, has announced the launch of a new free app designed to support the reduction of "highly toxic" pesticide use.

According to the group, reducing the use of highly toxic pesticides and offering relevant information about non-chemical pest control alternatives is "key in a world where around 2m tonnes of pesticides are consumed every year and where around 25m agricultural workers experience unintentional pesticide poisonings annually".

The new app, called Pesticides and Alternatives, brings scientific knowledge directly to the phones of farmers and plantation managers in developing countries so they can identify the least toxic pest control methods for their crop and typical pests.

Farmers can also search for and get to know the pesticide restrictions of nine certification systems – including Fairtrade – for more than 700 pesticide active ingredients.

As part of its initial release, the app also contains toxicity information related to all registered pesticides for relevant crop and pest species for Mexico and India, as well as by crop for Brazil, Colombia and Kenya. The toxicity information comes from government authorities, international agreements and/or academic institutions.

“Fairtrade are committed to supporting producers to make their production as sustainable as possible," said Catherine Thompson, head of innovation at the Fairtrade Foundation. "Producers living and working across the world can struggle to access information about the toxicity of highly hazardous pesticides, and the impact they can have on the environment and biodiversity.

“This new app is designed to support producers to reduce the use of pesticides within and beyond Fairtrade’s standards, enabling pest control with less negative environmental and human impact, which is very welcome.”

Fairtrade standards include strict requirements on pesticide use and handling, including that farmers receive training on non-chemical methods to control pests.

With the new app, small-scale farmers and larger plantations will more easily be able to find alternatives to the more than 200 hazardous pesticides prohibited by Fairtrade standards.