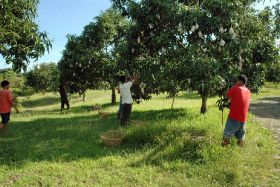 Dry conditions caused by El Niño have resulted in an oversupply of mangoes in the Philippines this season, with at least one province reporting a surplus of 2,000 tonnes.

The Philippines government has committed to helping growers manage the oversupply and sell the fruit before it begins to rot, which includes plans to increase exports, according to local news sources.

Agriculture secretary Emmanuel F Piñol said the Philippines could export an additional 100 tonnes of mangoes to Japan this season and negotiations were underway to ship mangoes to South Korea and Russia according, to a BussinessMirror report.

However, Piñol said the stringent food safety rules associated with shipping to these countries would make the plan to increase exports challenging.

The attempt to send some of the surplus internationally comes after a concerted effort to increase sales locally.

On 10-11 June, the Department of Agriculture (DA) initiated a marketing and promotional campaign across a number of major cities it dubbed ‘the TienDA Plus Metro-wide Mango Festival’. The two-day festival, held across a number of locations, showcased products from mango-producing areas.

While the Philippines’ mango industry is struggling deal with the oversupply and plummeting prices, Piñol said it is not the first time it has faced this problem. In 2015 El Niño was even more severe, and the yield was even higher than the current harvest.

“It’s a good phenomenon for us. The only problem is our growers weren’t able to immediately coordinate with us that they have expected oversupply and partly the DA has fallen short on monitoring these developments,” Piñol told the BusinessMirror.