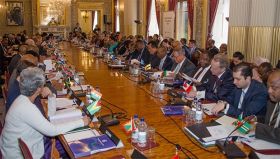 Senior trade officials from 53 Commonwealth countries will meet over the next three days (7-9 October) to discuss strengthening trade and investment within the Commonwealth.

Following this, Commonwealth Trade Ministers will meet on 10 October. Chaired by the United Kingdom, discussions will be centred on strengthening multilateral trade, fighting protectionism, and progressing efforts to achieve US$2tn worth of trade by 2030.

“The 53 member states in the Commonwealth boast a combined population of over 2.4bn people and intra-Commonwealth trade is projected to reach $700bn by next year,” said Elizabeth Truss, UK Secretary of State for International Trade.

“Our Commonwealth Trade Ministers Meeting is a tremendously valuable opportunity to consider issues of pressing concern in an atmosphere of trust and goodwill, and to agree on action that needs to be taken by our member nations collectively and individually.”

Ministers will also reflect on how to make trade more inclusive and sustainable, by engaging more women and youth at all levels, as well as developing the blue and green economy.

The outcomes of the meeting will shape trade-related discussions at the next commonwealth heads of government meeting scheduled for June 2020 in Kigali, Rwanda.