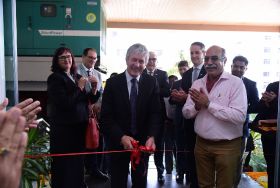 After a ribbon-cutting ceremony, minister Damien O’Connor and his New Zealand trade delegation toured the US$7.8m fully palletised storage and packing facility, said to be the first of its kind in the region.

The warehouse has the capacity to handle 4,000 pallets, including temperature-sensitive products like kiwifruit and stonefruit, and features customised Maf Roda grading and packing machines, according to the firm.

The Suri Agro Fresh team, which hosted O’Connor and colleagues throughout the duration of their visit, also took the minister on a tour of Azadpur wholesale market.

“There was a special mention from their team that the minister had an excellent time at both venues and they also mentioned that the market visit was one of his best experiences in the international market,” Suri Agro Fresh communications manager Roopam Suri told Fruitnet.

“India is a big market – with 29 states it is like 29 countries within one country,” he said. “There are so many markets here – some will pay Rs 200/kg apples,  while others demand Rs 20/kg apples. Kiwifruits have different markets too: the smaller fruit are more popular in the North East and South, while the bigger ones sell better in Delhi and Maharashtra. For most New Zealand companies, Delhi and Mumbai are good starting points.”