US ports take a hit

After a promising start to 2020, a number of Californian ports have experienced a downturn due to the coronavirus 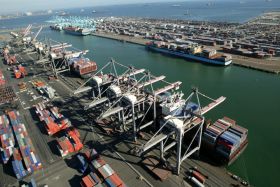 California’s ports have reported a downturn in activity in February 2020, with the coronavirus and the lingering effect of the US-China trade dispute cited as the causes.

The Port of Los Angeles moved 544,037 Twenty-Foot Equivalent Units (TEUs) in February, this represented a 22.9 per cent decrease compared to February 2019.

Mario Cordero, executive director of the Port of Long Beach, said the outbreak had seen shipping lines cancel some services.

“With the extended factory closures and slowdown of goods movement in China and other Asian countries in February due to Lunar New Year and Covid-19, we are seeing shipping lines needing to cancel some sailings,” said Cordero.

“Once the virus is contained, we may see a surge of cargo, and our terminals, labour and supply chain will be ready to handle it.”

Gene Seroka, executive director of the Port of Los Angeles, said the Port was also preparing for a surge when conditions return to normal but noted the wider effects of the outbreak.

“While cargo volumes are important, the coronavirus is first and foremost a public health crisis that needs to be brought under control with the collaboration of governments and medical experts from around the world,” said Seroka.

“We are more interconnected than ever with our global partners so it’s no surprise that Trans-Pacific maritime trade has been significantly impacted.”