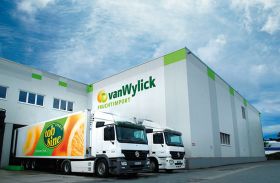 "We are looking forward to continuing to work with Capespan and Gemüsering," a spokesperson for Fyffes commented. "This purchase strengthens the relationship between Fyffes and vanWylick and will enable Fyffes to deliver better services to its customers."

"vanWylick remains an independent operation and Fyffes is proud to work with managing directors, Dirk and Jens Allerding, who will remain as leaders of the business," the spokesperson added.