ONE to deliver first direct link between US port and the Middle East, with calls in Asia too 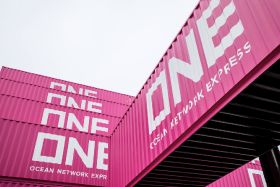 The new route will be serviced by 18 megaships, each with the capacity to carry 14,000 TEUs.  Port of Oakland maritime director, John Driscoll, said the ships are among the largest container vessels calling at US ports.

“Naturally we’re encouraged by this development,” said Driscoll.  “The size of the ships means extra cargo capacity coming to Oakland and the port rotation extends Oakland’s reach in global markets.”

The stop at Saudi Arabia’s Jeddah Port will be Oakland’s first direct connection to the Middle East.  Until now, ships from the Middle East transferred Oakland-bound cargo to other vessels at intermediate ports.

Port of Oakland said it expected cargo mix on the new service to be evenly divided between imports and exports.  Californian farm goods exported to overseas markets should be a prominent part of the mix, the port added.