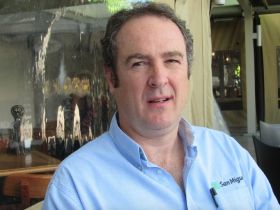 Alejandro Lucas, commercial director for fresh fruit at San Miguel Global, has decided to take a break from the fresh produce business.

Known as Alex Lucas he pioneered San Miguel’s investment in the South African citrus business where he became a household name.

“The decision was purely personal," explained Lucas, who has worked for the company for 19 years. "I love San Miguel and I am leaving on excellent terms. I just want to reinvent myself and try other things.”

Over the course of the last few years, he has been responsible for coordinating San Miguel’s South American and South African business.

“I will rest for the next two months and take that opportunity to think about my future,” he outlined.

Lucas is succeeded by Agustina Fabbio as commercial director. “The new product director is Manuel Suarez Altuna and our communication manager Mercedes Saraceni. They are a strong team in which we all have full confidence,” he confirmed.

“When he arrived here he, and his family, firmly embraced the local community and fully shared in all our initiatives to transform this valley,” De Waal said.

San Miguel’s investments in South Africa was mainly concentrated in the Sunday’s River Valley, but at one time the company also owned citrus farms in Citrusdal.

Lucas always maintained that the Eastern Cape was selected by San Miguel for this investment because the company regarded the climate to be the best for citrus production.