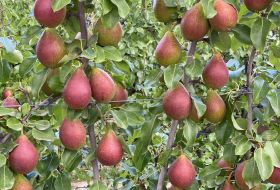 Horticulture Brand Management Australia (HBMA) has high hopes for the QTee pear, a new red blush offering that traces its origins back to Norway.

Growers across Australia have begun planting the branded variety, which is said to have a sweet, aromatic flavour and can be eaten either hard and crunchy or juicy and soft.

“QTee is characterised by its delicate, juicy flesh which it inherited from its parents Williams and Broket July,” according to a release from HBMA, which holds the Australian license to the variety.

QTee trees where first planted in Belgium in 2015. They have since been planted in Slovakia, Norway, Switzerland, South Africa, Spain, Austria and France.

“We have the Australian license from ABCz and Fruithandel Wouters and plan to plant for many years to come,” said King.

“We are supporting growers with international co-ordination and taking valuable learnings garnered from Europe to apply to Australian conditions.”

The early-ripening pear variety will be harvested in Australia from mid to late February. Production will be controlled by strict quality specifications, ensuring only the best quality fruit makes its way to market.

King said the QTee pear would be positioned as a healthy, low-calorie snack that is also ideal for cooking, baking, and preserving.

“Consumers’ biggest barrier to purchase is not knowing how to ripen a pear, so the fact QTee can be eaten crunchy or soft is brilliant,” King explained.