Total of 400 exhibitors, including 87 from China, are preparing to take part in Europe's first virtual fresh produce trade fair 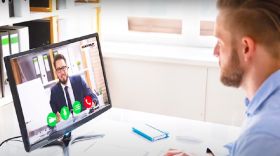