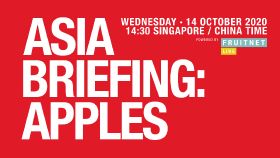 Asia Fruit Logistica ON’s series of free, online briefings for the fresh produce business is set to continue on Wednesday at 2:30pm Singapore/China time with a special focus on European apples in Asia.

Asia Briefing: Apples, which is powered by Fruitnet Live, brings together some of the leading names in Europe’s apple export trade – including Marc Peyres of French company Blue Whale and Nicola Zanotelli of Italian group From – to discuss the trade’s potential for further expansion following a period of recent growth.

Presenter Mike Knowles of Fruitnet also delivers an exclusive interview with Andrea Fedrizzi of Melinda and Augusto Renella of Naturitalia, who for the first time in 2020 are spearheading a new joint project to sell Melinda-branded apples to customers in Asia.

Plus, there will be a special live Q&A during and after the transmission, when Fruitnet's John Hey will be joined by Zanotelli and Tarun Arora of IG International, one of India's leading fresh produce importers.

For an increasing number of European apple suppliers, Asia is fast emerging as a really important place to do business.

Last year, Europe as a whole sold more fresh apples to customers in the region than ever before.

And with a steadily expanding portfolio of licensed club varieties in their collective back pocket, the prospects of a European apple rush in Asia over the coming decade are very real indeed.

Ten years ago, it was all very different. That year, Europe’s largest producer Italy chalked up less than 0.3 per cent of its apple export sales in Asia. Since then, however, the value and commercial importance of those exports has exploded – from around 1.1m US dollars to more than 175m US dollars last year. As a result, Asia now accounts for more than one-fifth of the value of Italy’s apple export business.

Countries including France, Italy, Poland, Germany and Serbia, as well as Turkey, are all now managing to sell significant volumes of apples to the region – significant, that is, in terms of their own export volumes, even if Europe’s overall share of the Asian apple market remains relatively small.

For some suppliers, the opportunity now is to build demand in existing markets. In 2019, for example, Europe overtook the US to become India’s largest apple supplier.

But for others, gaining access to countries that were previously off limits has delivered new opportunities to sell. Vietnam, Thailand and Taiwan have all granted access to Italian apples this year.

A sign of further growth to come? This week’s Asia Briefing will explore this exciting part of the business.

To see Asia Briefing: Apples and to take part in a live Q&A discussion, you will need register on the Asia Fruit LOGISTICA ON website. Just head to the website’s Events section and click on Pre-Event Webinars.