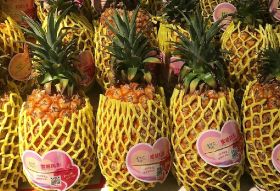 China has suspended pineapple imports from Taiwan citing "harmful creatures" that could pose a threat to Chinese agriculture.

According to a report from Reuters, China announced on 26 February that the ban would commence on 1 March, a move condemned by Taiwan’s leaders.

“China sent an ambush-like notice, unilaterally suspending the imports of Taiwan pineapples. This obviously was not a normal trade decision,” Tsai said.

“To support the farmers, let’s eat pineapples all together!”