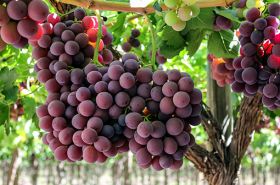 Chile exported approximately 138,892 tonnes (16.9m 8.2kg cartons) of grapes to Asian markets in the 2020/21 season, a 16 per cent decline in volume compared to last year, according to the Chilean Fruit Exporters Association (Asoex).

Despite the decline, the industry remains positive of the potential Asia has to offer, with volumes sent to South-East Asian markets showing promising signs of growth.

Red Globe is the main variety sent to Indonesia, accounting for 90 per cent of the the total volume of grapes exported, followed by Autumn Royal, which totalled 9 per cent.

Red Globe was again the main variety shipped to Malaysia, making up 53 per cent of  total shipments, with Autumn Royal the second most popular, accounting for 38.5 per cent.