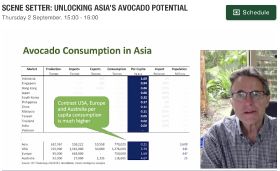 Asia’s growing appetite for avocados shows no signs of abating. That was a key takeaway from Global Avocado Congress (GAC), which streamed live earlier today (2 September).

Citing figures from the USDA, ITC Trademap and the World Bank, Prowse said some 2.8m tonnes of avocados were traded worldwide in 2020, up 9 per cent on 2019.

Of this total, 148,000 tonnes were shipped to Asian markets, 1 per cent lower than 2019 but still 13 per cent higher than the annual average over the previous five years.

“Mexico is the largest supplier to Asia, mostly to Japan while Peru has become a major supplier also,” Prowse explained. “The United States was steady, and Chile declined significantly with reduced supply. New Zealand and Australia both recorded lower volumes.”

While avocado trade into Asia is growing, consumer awareness of the product is still largely in a development  phase.

Prowse said total consumption of avocados across Asia’s 3.6bn population measures in at 0.21kg per person per annum.

Australia’s consumption rate of 4.67kg per person is the largest per capita outside of Central America.

“Whichever way avocados are consumed, from milk drinks to sushi, salads to guacamole and smashed avocado on toast, it seems there is strong demand globally and the taste for avocados in Asia is only just getting started,” Prowse said.

“China is a market that’s in early development…It’s far away from being mainstream,” Gomez explained.

Tommy Padilla of US-headquartered Mission Produce said his company was making progress in the Chinese market through Mr Avocado, its joint venture with Lantao International and Pagoda.

“Taking the guess work out of how to eat an avocado is key,” Padilla said.

Read more coverage on Global Avocado Congress on Fruitnet over the coming days.