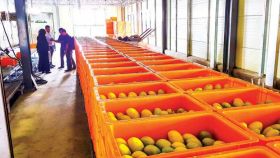 According to a report from The Phnom Penh Post, data from the country’s Ministry of Agriculture, Forestry and Fisheries revealed 202,141 tonnes of fresh mangoes were exported between January and October 2021, a 157 per cent increase year-on-year.

The main markets for Cambodian mangoes were Vietnam and Thailand accounting for 174,756 tonnes and 26,969 tonnes respectively.

This was followed by China which imported 215 tonnes, which was shipped after Cambodian mangoes gained access in April.

Hun Lak, chief executive of Rich Farm Asia, a local agricultural investor and mango grower, told The Post the mango export market and prices have been better in 2021 compared to previous years.

Lak said China would be a valuable market for the foreseeable future as long as production, packaging, quality and phytosanitary standards could be met.