Preliminary forecast suggests exports will increase by more than 29.3 per cent this season 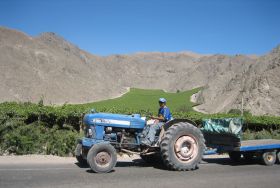 Chilean table grape exports are set to grow more than 29.3 per cent in 2021/22 according to the first forecast of the new season from the Chilean Table Grape Committee.

The estimate is based on information provided by 38 companies who span the country and between them represented 57.4 per cent of the country’s total export volume last season.

“Without a doubt, this estimate shows significant growth in shipments and a recovery in the Chilean table grape industry,” he said.

Regarding varieties, Bown said shipments of new varieties are expected to reach 35m cartons, followed by traditional varieties with 32m cartons, and Red Globe with just over 17m cartons.

“Our estimate, as well as the results of previous seasons, clearly show that the Chilean table grape industry is backing the production of new varieties, which have a better reception in the destination markets and allow improving the competitiveness of the national sector,” he said.

“Although there are traditional varieties such as Red Globe, our statistics show a continuous decline in their export volume. For example, 10 years ago our country exported more than 27m cartons of Red Globe grapes, while today that volume has been reduced to about 17m cartons.

“It should also be noted that within the replacement of vines for new varieties, Chile has a very important volume of green fruit, which is highly desired by international markets such as the US, China and South Korea, among others.”

Bown also emphasised that Chile has an “excellent” reputation for quality and reliability in all international markets, which “we must continue to take care of all the actors involved in the production and export process”.

The second seasonal forecast will be delivered mid-January 2022.