Pear production and exports will fall this year as the dry conditions bite, although apple exports are expected to increase 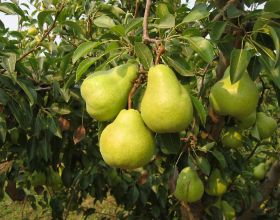