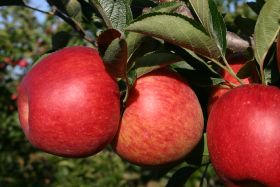 “Given it has a mild, sweet flavour profile, is refreshing and juicy, and has an excellent crunchy texture, we believe it will have very wide consumer appeal. This will be an outstanding apple in the Asian markets,” he said in a press release published today.

Prevar  chief executive Dr Brett Ennis said Prevar has been working toward commercialisation of the apple for the past two years.

“This apple is currently under trial throughout the world. Prevar has received very positive feedback from testing site evaluators, consumers and fruit marketers who have previewed the apple,” he said.

The apple will be commercially available in two-three years, and its brand name will be revealed closer to fruit availability, Prevar said in a press release.

Prevar is an international joint venture company developed to globally license and market new apple and pear varieties developed by the NZ Institute for Plant and Food Research.